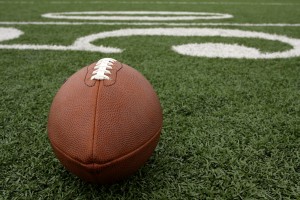 Every football fan envisions an undefeated season for their favorite team. Few have had the power to make their dreams come true. Morris Newburger, however, did it, literally, in 1941.

The sports pages of newspapers, and radio sports shows, too, reported the impressive victories of his team, Plainfield Teachers College. And it really was Newburger’s dream come true – since he dreamed it all up.

Newburger worked in a New York brokerage firm and was an avid sports fan, according to his friend and eventual cohort Alexander W. Dannenbaum Jr. One Saturday, after a leisurely lunch, Newburger stopped and phoned the New York Times sports desk and reported Plainfield Teachers’ first win of the season: Plainfield-21, Regency-12. Both teams were as fictitious as the score.

Plainfield’s victory was reported in the next morning’s paper. Encouraged by that unexpected success, Newburger, along with Dannenbaum and others at the brokerage house, created perhaps the first fantasy football league.

Newburger and his colleagues took turns calling the wire services on Saturday afternoons with Plainfield’s score for the day. Coached by Ralph “Hurry-Up” Hoblitzel, Plainfield grew stronger each week.  Those 12 points posted by Regency would be the only points scored against Plainfield that season.

In quick succession the Plainfield eleven defeated Benson Institute, 20-0; Winona, 27-0 and Randolph Tech, 35-0. And each week Plainfield’s scores were announced on the radio and appeared in newspapers across the country.

Newburger and his buddies expanded their ruse. They took turns writing press releases about Plainfield’s team. And their stories were being published, too. Newburger invented a sophomore running back sensation, John Chung, who averaged 7.9 yards a carry.  One reporter wrote, based on a Newburger press release: “John Chung has accounted for 57 of the 98 points scored by his undefeated and untied team in four starts.”

The wins kept on coming. In one news release, Newburger’s crony Jerry Croyden attributed Chung’s athletic prowess to the fact he ate a special kind of rice during halftime of each game.

As stories of Plainfield Teachers’ exploits became more and more publicized, Newburger’s press releases became bolder. In one he described Plainfield’s incredibly successful W formation where the offensive ends faced the backfield.  In another story he claimed the music for the Red Army marching song was “stolen” from Plainfield’s Alma Mater.

After winning seven games in a row, Newburger issued a full team roster, using the names of co-workers as players – and himself as quarterback.

Then, disaster struck Plainfield Teachers College. A mid-November press release reported that coach “Hurry-Up” Hoblitzel had to cancel the last two games of the season against Appalachian Tech and Harmony Teachers. What had happened?  Midterm examinations had caught up with his players.  Most of the team had flunked their tests and were academically ineligible to play football.

What was the real reason Newburger’s dream season ended?  A sportswriter for the New York Herald Tribune became suspicious of the team’s incredible success.  With a miniscule amount of research he discovered there was no Plainfield Teachers College. Nor did any of its opponents exist. It had all been a hoax.
Later, Time magazine wrote about the prank and took the newspapers to task for being so gullible.  Franklin P. Adams, a well-known sports columnist wrote a ditty about Newburger’s team, which begins with “Far above New Jersey’s swamplands,” and describes the perfect record of an imaginary team, and concludes, “Hail to thee, our ghostly college, product of a dream!”

Every football fan knows the game is a game of deception; nearly every play has an element of trickery or intended misdirection. Plainfield Teachers College, however, was deceptive only on the sports pages of newspapers.  >

Richard Bauman is the author of the book Holy Humor.