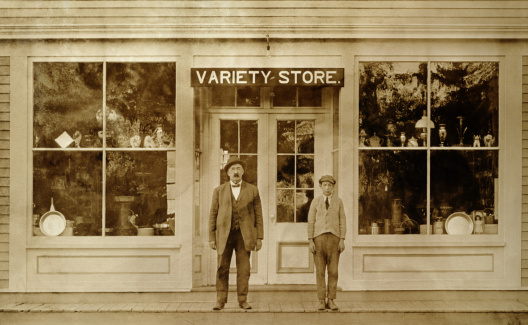 Man and boy standing in front of variety store

Nothing in J. C. Penney’s early life indicated that his name would one day become a household word in homes across the United States.Born in 1875, he grew up on a small farm in Kentucky. His father was a minister in the Primitive Baptist Church. Both parents were committed Christians who instilled a deep and abiding faith in their children. While a young teenager, his minister father became the victim of church politics and was removed as the minister. The ensuing financial hardship for the family meant that Penney had to leave school taking a job to help support the family. He began to work as a clerk in a local store. Although he did not realize it at the time, this modest start was providential and would propel him into an illustrious career as a retailer.

After working in various stores Penney was able to purchase a one-third interest in a dry goods store in Kemmerer, Wyoming. The date was April 14, 1902. Kemmerer was a small mining town of less than a thousand people. Penney and his wife lived in a tiny attic apartment above the store. Their furniture consisted of a large empty drygoods box for a table and smaller boxes for chairs. When their first child was born, Penney’s young wife wrapped their infant in a blanket allowing it to sleep under a counter while she stood beside it working alongside J. C. Penney serving their customers.

From that humble beginning, James Cash Penney would eventually preside over 1700 stores. He would lead the country’s largest chain of department stores, each one bearing his name, J. C. Penney. The influence of Penney’s godly parents became evident with the growth of his business as he began to describe his chain as “The Golden Rule Store” based on the words of Jesus in Matthew 7:12: “Do for others what you would like them to do for you.” (New Living Translation)

Although his enterprise made him incredibly wealthy, Penney’s life was not devoid of setbacks and troubles. In fact, beginning in 1929 events took place which nearly cost Penney his life. When the Great Depression struck the country, it came at a time of great financial vulnerability for Penney. While his stores continued to do well, Penney had been adding outside interests and these were proving to become extremely costly. In order to finance these outside interests, Penney borrowed heavily. In addition, Penney was becoming a major philanthropist, giving generously to organizations and individuals. The Depression prompted banks to request repayment of his loans sooner than Penney had anticipated. Suddenly cash flow was tight and Penney was finding it difficult to meet payment schedules. Constant and unrelenting worry began to take a toll on Penney. “I was so harassed with worries that I couldn’t sleep, and developed an extremely painful ailment,” he said.

Concerned about his deteriorating health, Penney checked himself into the Kellogg Sanitarium at Battle Creek, Michigan. It was the Mayo Clinic of it’s era. There, Dr. Elmer Eggleston, a staff physician examined Penney declaring that he was extremely ill. “A rigid treatment was prescribed, but nothing helped,” Penney recalled. He was attacked by the twin demons of hopelessness and despair. His very will to live was rapidly eroding. “I got weaker day by day. I was broken nervously and physically, filled with despair, unable to see even a ray of hope. I had nothing to live for. I felt I hadn’t a friend left in the world, that even my family had turned against me.” Alarmed by his rapidly deteriorating condition, Dr. Eggleston gave Penney a sedative. However, the effect quickly wore off and Penney awakened with the conviction that he was living the last night of his life. “Getting out of bed, I wrote farewell letters to my wife and to my son, saying that I did not expect to live to see the dawn.”

However, Penney awakened the next morning surprised to find he was alive. Making his way down the hallway of the hospital, Penney could hear singing coming from the little chapel where devotional exercises were held each morning. The words of the hymn he heard being sung spoke deeply to his condition. Going into the chapel he listened with a weary heart to the singing, the reading of the Scripture lesson and the prayer. “Suddenly something happened,” he recalled. “I can’t explain it. I can only call it a miracle. I felt as if I had been instantly lifted out of the darkness of a dungeon into a warm, brilliant sunlight. I felt as if I had been transported from hell to paradise. I felt the power of God as I had never felt it before.”

In a life-transforming instant, Penney knew that God with His love was there to help. “From that day to this, my life has been free from worry,” he declared. “The most dramatic and glorious twenty minutes of my life were those I spend in that chapel that morning.” These were the words from the hymn which spoke so eloquently and miraculously to J. C. Penney – God will take care of you.

The hymn which God used to save J. C. Penney’s life was written by Civilla Durfee Martin. Not much is known about the hymn writer. She lived between 1866 and 1948 writing the hymn in 1904. The inspiration for the words may come from 1 Peter 5:7 – “Give all your worries and cares to God, for he cares about what happens to you.” The opening lines read:

Be not dismayed whate’er betide, God will take care of you;

Beneath His wings of love abide, God will take care of you.

God will take care of you, Through every day, o’er all the way;