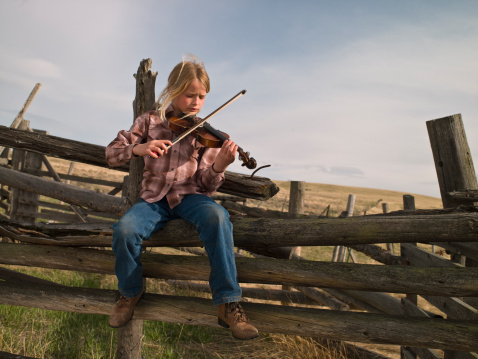 My sister older sister, Jean, remembers a dreadful day in junior high that was pivotal in helping her decide not to become a stage performer.

Growing up in Michigan’s farmlands, we spent our elementary years in a rural schoolhouse. But sixth-grade graduation brought many changes for Jean, including a leap into Webber Junior High the next fall, in the nearby city of Saginaw.

“In the big school,” she says, “we got to take either band or orchestra as a class, starting in seventh grade.” Jean borrowed an inexpensive violin from Grandma, and she happily joined the strings group.

She figured she’d need an impressive costume to boost her performance. “I dressed up as Minnie Pearl from the Grand Ole Opry and called myself Jeannie Pearl.” At the time, practically everyone loved Minnie Pearl, who sang, played the fiddle and cracked corny jokes. Jean hoped some of Minnie’s popu-larity would rub off on her.

“I wore a hat with a price tag dangling; big, ugly clodhopper shoes; and a gingham dress with apron,” she recalls. “Also, I stuck Black Jack chewing gum on my front two teeth to give me a gap-toothed smile. I already had freckles and frizzy hair – those were natural. I carried the old fiddle clutched tightly un-der my chin.”

To her surprise, the judges declared her a winner on the preliminary level. Even more astounding: they selected her to emcee the rest of the program. Her job for the evening would be to entertain the crowd between acts and to introduce other performers.

Jean remembers every detail. “The curtain went up and the spotlight fo-cused on me – Jeannie Pearl! I grinned, looking out at the audience of pupils, teachers, parents, and probably more.” Then she froze.

The only thought in her mind formed into a prayer: “Dear Lord, make me van-ish.”

“As I stood there, I promised the Lord I’d never set foot on stage the rest of my life, if he’d just make me disappear from this one.” But her prayer wasn’t answered literally, as she’d hoped. “I didn’t disappear,” she moans. “I just stood there! It seemed like an eternity.”

Finally the audience started to laugh. A few nervous giggles came first, then some chuckles, and eventually the whole audience guffawed. That laugh-ter, echoing throughout the Webber Junior High auditorium, startled her. It forced her mind into activity again. For the first time, she considered the audi-ence’s point of view. “I suddenly realized I didn’t even look like myself,” she recalls. The Minnie Pearl outfit proved to be a comical disguise – just what she needed at the moment.

She relaxed. “I gave my spiel, played ‘Old Susanna’ on the fiddle with or-chestra backup, did my little Hillbilly Shuffle, and bowed.”

That incident took place about 60 years ago. Since then, Jean gradu-ated from high school and college, married, had three children, and held a variety of jobs, including home economics teacher, county tax asses-sor, restaurant cook, and dog census-taker.

But did she ever perform on stage again? “Absolutely not!” she states. “I kept my promise, and so did God.”

Ruth McHaney Danner works as a writer and a tutor in Spokane, Washington.