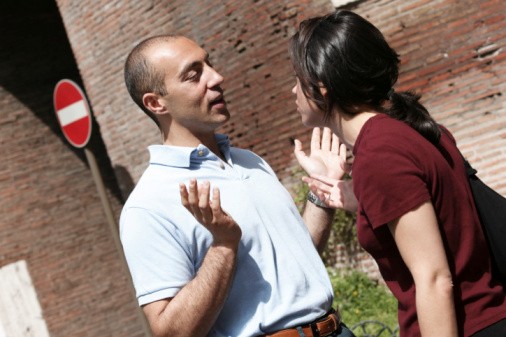 Driving through the supermarket parking lot I almost ran over a woman hurrying to her car. I had made a mistake. I was looking to the left while turning to the right when she rushed out of the store pushing a shopping cart loaded with groceries and almost directly in front of my car.

I barely missed hitting her.

Fortunately, she saw me and stopped just in time as I skimmed by. She yelled something at me, but I couldn’t understand her words through the closed car window. But she left no doubt she was enraged – and frightened – by my negligence.

I was at once seething with anger, too. In my mind she caused the near accident. It took just a fraction of a second for me to rationalize that if she hadn’t rushed into the parking lot, if she had been paying attention, then she wouldn’t have nearly stepped right in front of my car.

My hand was on the window crank and I was about to roll down the window and shout back at her, to tell her how stupid she was for being careless. But I didn’t. Something stopped me from verbally retaliating.

I didn’t lash out at her, in part, because I had recently joined a 12-step program for compulsive eaters, and the program’s tenth step jumped into my mind. It reads, in part, “when we are wrong, promptly admit it.” And I knew, in my heart, I had to admit that I had made a mistake, too.

While she might have erred in thinking I saw her, and would stop, I had to concede that I blundered, too. Making a turn in one direction and looking the other way was not a wise way to drive. So I was at least as much at fault as she.

I parked my car an aisle away from hers. Not sure what I was going to say to her, I said a quick prayer: “God, please give me the words to heal this situation.” Then I got out of my car and walked toward her.

She looked up, saw me coming, and the anger in her eyes and on her face told me she was going to let me have it. I’m certain she thought I was going to verbally blast her, and she was eager to get in the first volley.

“I’m going to report this,” she shouted. “Don’t think I won’t. Just wait and see.” Anger burst from her eyes, a look of rage covered her face. Her comportment seemed to say she was used to fighting for herself , and defending herself against others.

With calmness that belied the turmoil I was feeling inside, I said: “I just wanted to tell you I’m sorry I scared you. I didn’t see you right away.”

Her eyes opened wide, and her mouth literally dropped open. There’s no doubt she was astounded. It was as if she couldn’t believe what she was hearing. With a little less edge in her voice, but with some weariness, she responded tartly, “I thought you did it on purpose.”

“No, I just didn’t see you. I was looking the wrong way when I turned. I am sorry I scared you,” I reiterated.

In a calm voice she thanked me for coming over to apologize. I said goodnight and walked back to my car.

I wish I could say I returned to my car with peace and serenity bubbling in my heart. Not so. The truth is I was piqued she didn’t recognize her mistake and apologize for her part in the incident. I was surprised by the residue of hostility I felt toward her for not apologizing. However, I squelched the urge to turn around and demand she apologize to me. Instead, I said another prayer: “Thank you, Lord, for giving me the right words to say to her.”

I recognize now that it is normal to have some dregs of animosity toward the other person, even when I admit I am wrong. I just don’t have to react to the internal enmity.

Later, when the emotional commotion passed and I could reflect on the incident, I could appreciate that apologizing for my carelessness was the right thing to have done.

I’m sure there are numerous places in Holy Scripture that address scrapes akin to that one in the parking lot, but the one that comes to mind was when Christ said,

“Love your enemies, do good to those who hate you, bless those who curse you, pray for those who abuse you” (Lk 6:27).

And I pray that when I err I will recognize it, have the courage to promptly admit I was wrong, and accept the other person’s response no matter what it might be.