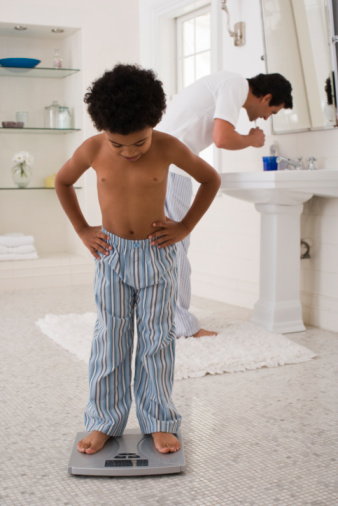 I watched as my three-year-old son, Nathan, stepped onto the bathroom scale and waited patiently for the digital number to appear. When it did, he sighed and shook his head. “I weigh frirty-free pounds, Mommy,” he said as he stepped off the scale.

I suppressed a smile, knowing that my little boy was merely imitating what he saw me do every morning.

That evening at dinner, my husband, Eric, asked each of our children what they had learned that day. One child mentioned that she got an A on her science test. Another said that he learned a trick to remember how to multiply by nines.

And then Eric turned to Nathan and asked, “What did you learn today, Buddy?”

I expected Nathan to mention the puzzles we’d done or the books we’d read, but he smiled and said, “I learned that only grown-ups can say ‘stupid.’”

Eric stifled a laugh as I hung my head. I’d used the word on the phone that afternoon and he’d been repeating it ever since. I’d tried to explain that it really wasn’t a nice word, and that I didn’t want Nathan to say it, but he just kept saying, “But you said ‘stupid,’ Mommy. You said it.”

Right or wrong, Nathan was watching me. Right or wrong, he was imitating my behavior. And it seemed that I was doing a whole lot more wrong than right.

The following morning, I discovered Nathan sitting on my bed with my Bible open in his lap and a green highlighter in his hand. Most of the book of Proverbs was covered in green. “Look, Mommy,” he said with a grin. “I write in the Bible, just like you do.”

“But I color in it, just like you, Mommy,” he said again.

I fought my irritation as I took the Bible away from him. “Nathan, this is not for you to draw on.”

“But I just want to be like you, Mommy,” he said, sticking out his lower lip.

I sighed and glanced down at my badly damaged Bible. Despite the green marker mess, one of my favorite verses jumped off the page at me. It says, “Train children in the right way, and when old, they will not stray” (Prov 22:6).

“Thanks for the reminder, Lord,” I murmured, as I found Nathan’s children’s Bible and began to read to him.

I’m far from a perfect mother. My three-year-old son has a potty mouth and a slight obsession with his weight. Both of those things can be blamed on me. But he is also starting to understand the importance of studying God’s Word.

Maybe I’m doing something right after all.