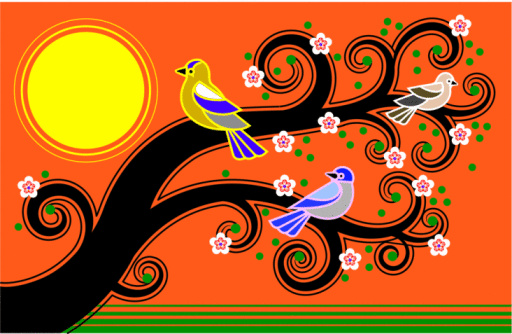 The brown thrasher may not be the most glamorous visitor in my backyard. This reddish-brown bird blends in with the leaves that litter the ground as it pecks away, looking for insects. What I didn’t realize about this prolific songster is its repertoire of more than 2000 songs, more than any other North American bird!

Music is for worshiping God. As the psalmist proclaims, “For this I will extol you, O Lord, among the nations, and sing praises to your name” (Ps 18:49). But such praise is not only reserved for humankind. All creation sings to God. “Wild animals and all cattle, creeping things and flying birds! . . . Let everything that breathes praise the Lord!” (Ps 148:10, 150:6).

Just as the hymns we sing convey emotion, poetry, and worship, birds seem to be creating similar songs. Birdsongs are just as much a joy for us listening as they are for the birds singing. For songbirds, vocal expression provides a vital aspect of their lives, and an important contribution to ours as well.

Although I love the shy, tiny Carolina wren, its quick, whistling notes in the early grey dawn can be more piercing than any alarm clock. But there’s something to be said about waking up with a song. A recent poll found many people are happier and look forward to the day when they sing in the shower. And with the acoustics of the tiled surfaces and isolated space, any song will sound more pleasing.

As it turns out, God planned early morning as the best time for birds to sing too. With little wind, sound travels more readily in the morning than later in the day. And when perched high in the trees, birdsong travels farther and louder when it isn’t being absorbed by ground vegetation or competing with other noises like a rushing stream. The light is still too low to search for food, but it is enough to trigger a bird’s brain to start singing. And perhaps birds are sending out the message, “I’m still here, healthy and fit for mating!”

I remember my mother teaching me the hymn “A Mighty Fortress Is Our God” as a young child. “What is the ‘one little word shall fell him?’” she asked. “It’s Jesus!” I replied.

Perhaps you learned your first hymns from a parent or Sunday school teacher. God has given birds the ability to pass down their song through the generations, also. Baby birds appear inclined to learn their own species’ songs. A white-crowned sparrow living with a white-crowned sparrow and a song sparrow will learn its parent’s song. They begin with a babbling noise much like babies, gradually mimicking and comparing their song to their parents. For weeks they practice and correct their mistakes, until their song becomes an exact copy of the parents’.

On the other hand, as adults, birds can take bits and pieces of songs and begin to invent their own. Some birds are constantly rearranging the musical notes and phrases; for example, the red-eyed vireo may create 20,000 melodies a day. A number of birds pick up new songs during migration. The marsh warbler copies the songs of more than ten species as it travels between its European and African homes.

Another way birds sing new songs is by mimicking others. A British cellist practicing outdoors noticed nightingales were joining in, harmonizing their music to hers. Mockingbirds, mynahs, catbirds, and starlings are other well-known imitators, able to copy sounds of a barking dog, car alarm, or a baby’s cry.

In addition to those shower wake-up songs, we sing to celebrate birthdays, show our patriotism at sporting events, worship God in church. Birds sing many types of songs also, depending on their purpose. If they are locating food or signaling the presence of predators, males use short simple songs; when courting females or warning rivals their songs become longer and more complex.

In addition to these eloquent solos there are duets and even whole choruses for our enjoyment. Swans sing their love duet back and forth as they greet each other each morning. And wrens often sing as a group, with males and females each having their own part in the choir.

How many songs do you know? The number of total songs each bird sings depends on the species, their age, and where they live. An indigo bunting sings only one song, an American robin, 70, a northern mockingbird, 200, and as noted, the record holder is the brown thrasher with a repertoire of more than 2000 songs.

Birds and all creation join us in worshiping the God who made us and cares for us daily. Birdsong? Yes, birds use it to attract a mate and defend their territory. But the next time you hear that morning chorus, join in and celebrate the best reason for singing, praising our awesome God together.