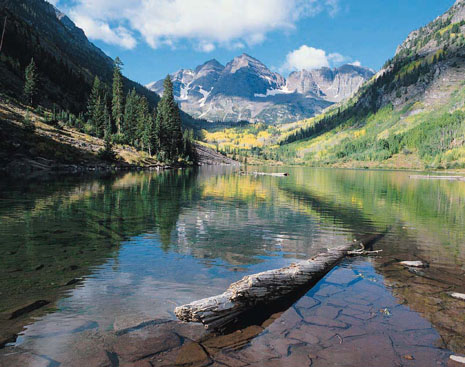 After toiling for eight and a half months in an immense pit, seven stories deep, where the World Trade Center twin towers once stood, a final tribute was held to honor those who died at ground zero. The ceremony on May 31, 2002, marked the end of recovery operations. In the presence of firefighters, police officers, emergency aid workers, politicians, religious leaders and other interested people, the mostly silent ceremony was movingly punctuated by a band playing “America the Beautiful.” Written as a poem by Katherine Bates in 1893, “America the Beautiful” is a song that inspires pride, instills hope, and unites the nation in times of national crisis.

The inspiration for this song began in 1893 when Katherine Bates was a 33-year-old teacher at Wellesley College in Boston. She was the daughter and granddaughter of Congregational ministers and had, by this time, established herself as a gifted English professor. Because of her growing reputation in academic circles, Bates was invited to teach a summer course at Colorado College in Colorado Springs. She agreed and, since this would be a long, arduous journey, Bates took her time traveling. Three events on that trip combined to provide her with the inspiration for writing “America the Beautiful.”

First, she spent a day visiting and touring the spectacular Niagara Falls where she was highly impressed not only by the beauty but also by the power and majesty of the waters. The scene of such massive, pure power resonated in her subconscious. Second, Bates stopped in Chicago to attend the World Columbian Exposition. This fair was designed to celebrate Columbus’s discovery of America and it was at the Columbian Exposition where Americans first learned of the ice-cream cone, the hot dog, and a giant Ferris wheel.

The third experience which cemented Bates’s inspiration took place on July 22, 1893. She, along with a group of tourists, sat in a mule-drawn wagon taking them to the top of Pikes Peak. It would take the animals four hours to make the 14,110-foot ascent. When she arrived at the top, Bates found herself breathlessly overwhelmed by what she saw: an enormous deep blue sky; huge snow-capped mountains; large flowing rivers; small towns and villages; and roads that disappeared into infinity. Just a few weeks earlier, Bates assumed that nothing could match the majesty of Niagara Falls and now she witnessed something that touched her even more deeply. Later she described that experience in a letter to a friend saying: “All the wonder of America seemed displayed there, with sea-like expanse.”

From the time she was a child, Bates loved to write in a journal and always carried a notebook and pencil in order to record her observations and inspirations. Sitting at the top of Pikes Peak, she reached for her notebook and began to write. Phrases simply came to her without effort and without editing. Initially, her reason for writing was simply to record the moment for herself and possibly to share with friends when returning to Boston.

After returning to Wellesley, Bates re-read her writing and was not impressed. Something was lost in the transition from her mind to the written word. Nevertheless, after a quick re-write, she sent the finished poem to a magazine publisher. Expecting a prompt rejection, Bates was surprised when the Congregationalist – a weekly denomination magazine – published her “America the Beautiful” in the July 4, 1895, issue.

At that time, many American magazines routinely published short poems but most of them did not draw much attention. “America the Beautiful,” however, was a notable exception as hundreds of subscribers wrote the editor extolling and praising the piece. One reader was a musician named Silas Pratt who sent the Congregationalist a melody he had written to go with the poem. His tune was just the first of 75 different tunes that tried to match Bates’s words to music. None of them worked, although some did better than others. It seemed that Bates’s poem would be limited to recitation rather than being sung.

Then, in 1904, Clarence A. Barbour, a Baptist minister who was moved by the words, felt deeply that Bates’s poem needed music so that it would be spread around the country and into the hearts of millions. Thus he committed himself to finding a melody that would match the beauty and depth of Bates’s poem. Researching a number of songbooks, he eventually came across an obscure tune called “Materna.” It had been composed in 1890 by hymn writer Samuel Ward. As Barbour experimented with Ward’s tune and Bates’s poem he realized that he had discovered the perfect match.

The new song was first presented at Boston’s Lake Avenue Baptist church that year where it was well received. Six years later, in 1910, Barbour put this version of “America the Beautiful” into a compilation titled Fellowship Hymns. With that best-selling hymnal, Ward’s tune eliminated all other tunes that have been used with Bates’s poem. Churches and organizations all over the United States began to sing “America the Beautiful.” Bates, who lived until 1929, had the pleasure of seeing her poem become the nation’s most well known and beloved patriotic song used both in times of peace and in times of war. In its present form, the song gained wide popularity during the difficult days of World War I and did much to foster patriotic pride and hope among Americans. Bates said: “That this hymn has gained, in less than 20 years, such a hold as it has upon our people, is clearly due to the fact that Americans are at heart idealists, with a fundamental faith in human brotherhood.”

Interestingly, Bates never received nor claimed any royalties for her writing. Likewise, Samuel Ward and his family never asked for payment when the tune was used. Both Bates and the Wards felt that a higher hand was at work in producing the words and uniting them to a tune. Simply stated, they felt strongly that “America the Beautiful” was a gift to the American people.

Across the decades, Bates’s poem has continued to resonate with people. On July 4, 1991, entertainer Frank Sinatra wrote a patriotic article for the Los Angeles Times in which he urged Americans to be proud of their country and live up to the ideals of the founders. Sinatra challenged:

“As we celebrate our own beginnings, let us offer out thanksgiving to the God who arranged for each of us to live here among His purple mountain majesties, His amber waves of grain. Don’t just lip sync the words to the song. Think them, live them.”

In 1997, Ted Turner, founder of television news channel CNN International, publicly urged that “America the Beautiful” be adopted as the official US national anthem.

Katherine Bates continued as a professor of English at Wellesley College, teaching there for 40 years. Although she was a prolific writer, the author of 32 books, she is best known for the simple and magnificent poem she wrote at the top of Pikes Peak on July 22, 1893.