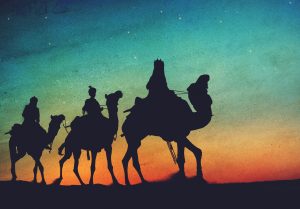 Like most almost-four-year-olds, Justin is a quick study. When Ruthie reads him a new bedtime story, he digests the high points at once and in a few subsequent readings fixes every single word and nuance of expression into the computer in his head. After that, trying to read him the story is redundant; he anticipates the reader’s every word.
On Christmas Eve, Ruthie told Justin the Christmas story, which had become a favorite with him since she had added it to the bedtime repertoire earlier that month. Justin was delighted that Larry was home to hear it, too. He managed to sit still and let his father listen for a while until Ruthie got to the part about the baby’s birth.
“And Mary put her little baby boy to sleep in a manger,” she said.
Justin interrupted her. “That’s a place where you put hay for the cows to eat, Daddy. And then the angel of the Lord told the shepherds all about the baby Jesus being born. The angel said they were supposed to go see him.”
Valiantly, Ruthie tried to continue. “And suddenly, the heavens were filled with a multitude of the–”
“ . . . Heavenly host – that’s a lot more angels – all saying, ‘Glory to God in the highest.”
By now, Larry was struggling not to laugh. “How do you know all those things, Justin?”
“Mommy told me. There’s a lot more to the story, Daddy. The shepherds brought a baby lamb to Jesus and they all kneeled down in the hay and looked at him. He was sleeping.”
“Did anyone else come to see him?” Larry asked.
“Oh, yes, some wise guys came. They had some cool presents to give him. But, at first, they didn’t know the way. I guess the star went out. So they stopped and asked King Herod how to get there and he said he didn’t know but if they found the baby Jesus, they were to come back and tell him so he could give the baby some presents, too.”
“Well, did they find him?”
“Yeah, they did.”
“Did they go back to tell the king?”
“No, that angel of the Lord told them King Herod didn’t really want to give Jesus presents; he wanted to kill him. Because he was jealous, I guess. So the wise guys sneaked home a different way. And that same angel guy told Mary and Joseph to take the baby Jesus to Egypt where he’d be safe from King Herod.”
“I’m glad they got away,” Larry said.
“Yeah, me too. But you know what that bad king did? He killed every baby boy in the country, all but Jesus who got away safe. And that’s a great story, Daddy, except for that mean old King Herod.”>