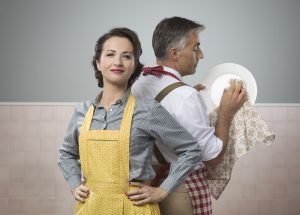 Honey, it’s dripping,” I told my husband as he helped me by clearing the dinner dishes from the table. “Put your hand under the dish so it doesn’t drip on the floor.”

My husband, Eric, nodded and dutifully did as I instructed.
“If I have to mop the floor when you’re done, then your help wasn’t really all that helpful,” I added.
Eric just nodded again.
But two-year-old Nathan had something to say. “Honey, it’s dripping!” He called out gleefully.
Eric and I looked at one another and laughed. “I don’t think he knows what that means, but he’s sure having fun saying it,” Eric said.
But the next day, Nathan and I were out shopping, and a lady stopped to talk to us. “Hello, young man,” she said, smiling at my son.
Nathan pointed at her wet-from-the-rain umbrella. “Honey, it’s dripping,” he said.
The woman laughed when I explained what had happened in our kitchen the night before. “We didn’t think he understood what ‘dripping’ is, but clearly he knows,” I said.
“Honey, honey, it’s dripping,” Nathan squealed with a grin.
The lady put her hand under the umbrella to appease my son. “Yep, he knows,” she said.
The next day, Nathan spilled a cup of milk from his high chair. “Honey, it’s dripping,” he shouted as the mess reached the floor.
He definitely knew.
The phrase became an often-used one in our home, and not just by Nathan. Any time I called one of my family members Honey, they finished my sentence for me. “Is it dripping, Mom?” They’d ask with a smile.
One day, I was shopping at a craft fair and I spotted a display of hand-made signs with Bible verses on them. There were signs quoting many of the encouraging verses Christians commonly quote in times of trouble. But one of the verses actually made me laugh. It was Proverbs 27:15, which says, “A quarrelsome wife is like the dripping of a leaky roof in a rainstorm.”
I’d never heard the verse before, and I found it funny that someone would hand paint it on a sign. Of course it caught my eye because the verse included my family’s new favorite word.
I bought two of the other signs and left the one about the quarrelsome wife in the store. After all, it’s not like it applied to me or anything.
But when I got home, I couldn’t stop thinking about it. Only now, it didn’t seem quite so funny. Especially that evening when I became irritated with the way ten-year-old Julia loaded the dishwasher.
“Honey…” I began to correct her.
“Is it dripping, Mom?” She joked back.
No, it’s not, I thought. But I think I am. I thought back on my interactions with my family over the last few weeks. And I realized how often I became annoyed with my husband and children when the way they did things wasn’t exactly how I would have done them.
When Eric got home from work that night, I showed him the signs I’d bought at the craft fair. “They had another one there,” I said. “I didn’t buy it, but I think maybe I should have.”
I told Eric about the verse in Proverbs. “Do you think I’m a quarrelsome wife?”
“No, of course not,” he said quickly.
“But I’m kind of bossy, right?” Before he could answer, I said, “The ‘Honey, it’s dripping’ thing got started because I was being bossy.”
Eric shrugged one shoulder. “You’re not bossy. You just like things done a certain way.”
“And I want other people to do it that way too. That’s the very definition of bossy.” I sighed. “I don’t want my critical words to be like drips in a leaky roof.”
Eric put his arms around me. “Honey, we’ve got five kids. That’s a lot for anyone to manage. You’re being too hard on yourself.”
“I still feel like I need to work on it,” I said decisively.
Over the next few weeks, I paid close attention to the way I spoke to my family. I tried not to impose my way of doing things on them. I smiled and thanked them for their help with chores, even when things weren’t done the way I would’ve done them.
When I slipped up, I asked them to forgive me, and I asked God to help me do better the next day.
As a reminder that my words matter, I pictured a drip in a leaky roof. Drips that, one at a time, don’t damage anything, but when they add up, those drips can create a flood that can ruin everything. “Dripping” became my code word for criticism and I was determined to make my house a drip-free zone.
I loved my family, but I wanted to love them better. I didn’t want my words to hurt them. It was hard work, being so careful with my words. But my family’s feelings were worth it.
One morning after a shower, a few weeks after I’d started my quest to be less critical, Nathan saw me and noticed that my hair was wet. “Honey, you’re dripping,” he said.
“Yeah, but I’m dripping less than I used to,” I said with a smile.>